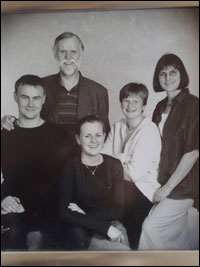 I was born on 5 July 1949 in Copenhagen. I grew up in the vicarage in Hoptrup near the German border and took my BA in 1969. I became a weather observer in the meteorological office of the Royal Danish Air Force, but in 1970 I enrolled at the pilot school of the Royal Danish Air Force. When I could not complete flying training I returned to the met office, until I enrolled at the Aarhus Teachers’ Training college in 1972.

In 1974 Inger and I got married. Both of us completed our teachers’ training in 1976 and were employed at Horne Youth High School. In 1979 we had Simon, and the following year we resigned from teaching and prepared to move to Bangladesh employed by the Danish Santal Mission.

In 1982 we moved to Bangladesh, and there we had our daughters Gunvor in 1984 and Martha in 1986. All our 3 children started at the Norwegian School in Katmandu, Nepal, but in 1995, when Simon completed his 9th grade and Gunvor was in 4th and Martha was in 2nd grade, we decided to return to Denmark after almost 14 years in Bangladesh.

In Denmark I started as a development consultant in a Blue Cross Denmark, an NGO working with rehabilitation of alcoholics, while Inger decided to go back to teaching and was employed at Klippen, a Christian private school in Voel. I became part of the 3-man management team of Blue Cross Denmark in 2002, but in 2003 – after having completed my development consultant training – I resigned. Today I am a part time taxi driver in Silkeborg and now part time running my one-man company Bangladesh Consult.